If you end up in Timisoara… 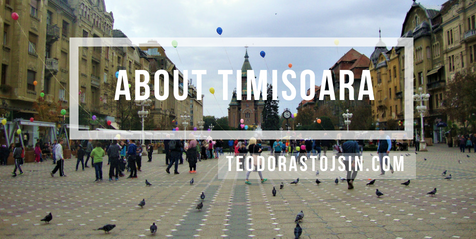 I’ll be honest, if you end up in Timisoara, you’d enjoy it. For a day or a few. Honestly, if you never visit this city, you will still survive. Do you know this places which are nice but you’d also live perfectly fine if you skip the visit there? Well, Timisoara is one of them. However…If you still end up there, it’s good to know something about the country and the city itself.

For example… Romania has amazing landscapes and mountains, especially in the area called Transilvania. And yeah, Romania also has a great wine. And gold resources. What I spotted was how beautiful money Romanians have! 😀 Like, really. The material is gorgeous. I still have one lei in my room as a souvenir.

Romanians also have an interesting way of celebrating the New Year. People dress up in bear costumes and dance to street music. Interesting non-related fact, right? Well, don’t worry, I’m not going to write about the New Year in Romania now. Basically, I’ve been only in Timisoara and if you are visiting the city for a day, check below what the city can offer you.

Romanians usually like foreigners, especially in Timisoara. Which is a good thing as it means that they’ll do anything to make you feel comfortable. Bucharest is a capital and it’s well-developed, modern and touristy. Timisoara isn’t. However, it’s the third largest city in Romania, and in 2021 will be the European Capital of Culture. There is a quite influence from some ethnicities living there, such as Germans, Serbians, Hungarians, Bulgarians etc.

Timisoara has also the airport and it’s a good connection to some parts of Europe. Tickets can be insanely cheap! That helped the tourism of the city and also, some statistics say that Timisoara is one of the safest cities in Romania. This city was the first European city to install electric streetlights. It actually happened in the 19thcentury, immediately after New York.

Wow, right? Another mind-blowing fact is that the bridge over the river Bega was designed by, believe it or not, Gustave Eiffel! I bet you know that he designed the Eiffel Tower in Paris as well.

The center and its architecture

As it is in smaller cities, the city center is touristic and it offers the most to foreigners. The most important squares you’ll find there are Union Square, Victory Square, and Freedom Square. Quite usual names for this part of Europe, right? All those squares are wide, spacious and nearby. The city center is quite small and it can be explored quickly and easily by foot.

Speaking about the architecture, Timisoara is often compared to Vienna. I wouldn’t go that far, but it’s the fact that, in some parts, these cities do have similar architecture. It’s all because of the influence of the Hapsburg monarchy in Romania in the 17th century. At a time, Timisoara was known as “Little Vienna”. Nowadays, the city is not that attractive. The main reason is that the buildings in the center must be repaired.

The interesting thing I noticed was that, when I was there, the city wasn’t crowded at all. Better say, the city was quite empty. However, the central area is full of bars, pubs, coffee places and restaurants. Also, locals usually speak quite good English.

Parks as one of the symbols of Timisoara

The most important park is Roses Park, located behind Freedom Square, next to the River Bega and next to the gorgeous quayside along the river. This park had around 1200 varieties of roses! Wow, right? That made locals in Timisoara very proud back then. Sadly, in World War II the park was destroyed, and when the Romanians re-built it they saved only about half of the original rose species. Today you can find around 600 varieties in this park, planted in different layouts. Nowadays, this park is also used for festivals and events.

If you like parks, you should also visit a Central Park, Botanic Park, and Justice Park. It’s good to know that a Botanic Park has been designated a scientific reservation. Local people told us that soon this park will be pronounced a protected area.

The traditional food and prices

If you like food from Balkan countries than you’ll like Romanian one as well. I’d definitely recommend people to try organic food from Romanian farms. You can usually find things such as cheese, vegetables, or meat.

Prices in the city are quite low. In the center, you can get a coffee or any other drink for 2 euros and less. You can find a meal for 3-5 or 10 euros. Or even more, depends on the dish.

Why would you visit the city?

Besides the fact you are meeting a new culture and visiting something new, there are also cultural aspects. Timisoara has few festivals such as Street Art Festival called Street Delivery. It attracts many visitors from all over Europe. Timisoara also organizes a student festival called StudentFest or an international jazz festival called Plai etc.

If you know other reasons why someone should visit the city, let me know in the comments. And if you want to get the email when the articles are published, leave your email below on this page.

See you next week! 🙂

Filed Under: ENGLISH, Romania
The High Tatras on a budget
London in two days