A story of cycling 800 km from Berlin to Amsterdam 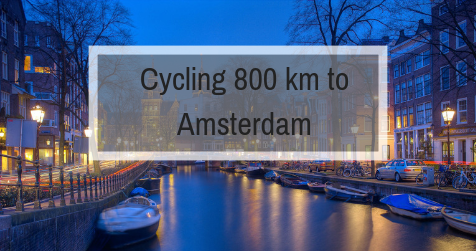 How many times did you hear this cool adventurous stories of walking, running, cycling or hitchhiking throughout the world? Every story is unique, right? As I know personally heroes of this story, this time I couldn’t leave my fascination only for myself. I had to share it with you guys!

Who are the heroes of the story?

The story begins with Rafael Leite. He is a passionate biker, originally from Brasil but he spent a big part of his life living in Portugal. For already a few years now, he lives in Brno, in the Czech Republic. As you can imagine, Rafael got to travel all around Europe using his bike and he actually writes about it on his blog Keirinstreeets. This summer, he and his friend, Luis Silva came up with a great idea… Why not spend the last sunny days on a bike road trip through the Central and Northern part of Europe? The idea itself was enough and they started with choosing the route. 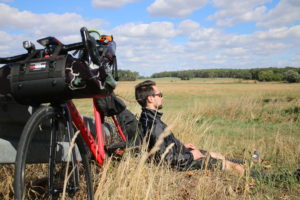 As Rafael loves Amsterdam, they decided that can be the reasonable choice for a destination. They knew that going all the way to the Netherlands from the Czech Republic by bike will take quite some time… therefore, they decided to go for an alternative plan.

“The plan was the following: We would take a bus from Brno to Berlin, ride our bikes for the next 6 days to Amsterdam and finally take the flight back from Amsterdam to Prague.” – explained Rafael.

That is how they booked only a single flight from Amsterdam to Prague and went for an adventure. 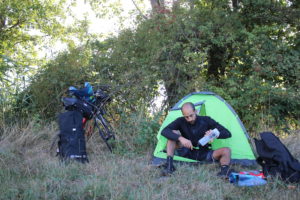 Riding 140 km per day – this is what you call an adventure!

Are you wondering why they chose the route Berlin – Amsterdam? Both of them ride single-speed bicycles, therefore, they wanted to avoid hills as much as possible. Makes sense, right? They arrived in Berlin quite fast and once they left the bus, they unpacked the bikes and started heading west.
Going to Amsterdam would almost guarantee a flat trip but what the guys didn’t expect was to encounter constant headwind.

“Our trip to Amsterdam lasted 6 days. We would ride around 140 km a day and we stopped whenever we saw an interesting city on the way. For example, that happened in the middle of Germany, in Wolfsburg where we found a cool beach crowded with people and decided to take a dip in the lake. We would soon keep riding again until it got dark as we needed the time to look for a place to set up the tent.” – said Rafael. 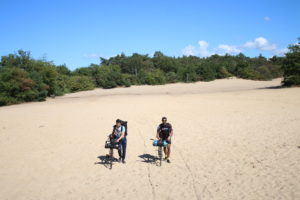 These guys spent nights out camping. Sometimes in the wild, sometimes behind the fire station and once even on a nightclub couch! Rafael said that one night in the tent, some extremely loud cows woke them up. He was confused and probably a bit scared – he thought they were just behind their tent.

Well, they could be but luckily, he was mistaken. The cows were really far away.

Luis and Rafael arrived in Amsterdam one day before they expected. There were still two days to ride around the town and enjoy everything Amsterdam has to offer.

What is louder – a cow or a dancing club?

Rafael and Luis didn’t have the accommodation booked in advance and they thought they’ll do it easily upon their arrival. Once they reached Amsterdam, they realized all the hostels are overbooked. Somehow it happened that they met some people through a biking group on Facebook. It wasn’t a plan but they were cool and guys ended up crashing at their place for the night.

“The next night, the guy who had provided us with the bed went to work in a nightclub. We kind of got the access to his club office and crashed there for the night. It was quite cool because, I woke up in the middle of the night to drink some water and I got curious about the club. I went inside, danced a little bit and then went back to sleep. And you know what, the cows in the wild during the night were much louder than the music and the people in that club!” admitted Rafael.

The next day they took a direct flight back to Prague and the adventure has been finished. In total, they did 800 km by bike. Incredible isn’t it?!

And now, your turn. Would you be adventurous enough to do this kind of trip? If you would or if you did it already, share your thoughts in comments. If you have some incredible story as well, share it also directly with me. I’d be more than happy to publish it here! 🙂